Welcome to the Jack Reusen website! We have no idea how you found it but we’re glad you did. If you would like to say ‘Hi’ and tell us what brought you here we welcome you in the comments below.

This site exists so that you can find information about John Bray’s ‘Jack Reusen’ series of books, along with details of his other work. 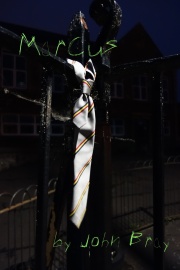 John’s latest book ‘Marcus‘ is a dark fantasy novel for readers aged ten and up.

Set in Crieff (in Perthshire, Scotland), this story weaves through the town’s past and its present.

“There is something very strange about Marcus, and James might be the only one who sees it. When James discovers an old WWII photo, he can’t believe his eyes; right at the front of the picture is Marcus. But will anyone else believe him? More to the point, will James get a chance to share what he’s found at all?”

A draft version of the full book is available on this site. You can click here to navigate to chapter one of Marcus. Alternatively, you can buy Marcus in paperback in Fun Junction toy shops or by mail-order by clicking the ‘buy now’ button above (it costs £6.99 including postage and packaging).

Where it all started

John’s ‘Jack Reusen’ series was written for children aged seven years and up. Whilst reading ‘Harry Potter and the Philosopher’s Stone’ to his (then) seven-year-old son, John noticed that his son’s attention would drift long before the end of the chapter.

John loves fantasy books and wanted to find a real fantasy adventure that he could enjoy with his son. There were a host of brilliant books available for his son’s age but none of them were quite the adventure John was looking for. He decided to write his own. One where the parents aren’t killed off in the first chapter, where the ‘secondary’ characters get to take over occasionally, and where a chapter can be read in the ten to twenty minute window of bed-time.

The short chapters also make the series a perfect fit for reluctant readers as it’s a fun read for any age. The chapters are short and the stories pack a whole heap of adventure into a (moderately) small package.

In fact, John has had more than a few children (some as old as ten) tell him that ‘Jack Reusen and the Fey Flame’ is the first chapter book they have ever read. It’s this sort of response that keeps John working on more stories.

Jack Reusen and the Fey Flame:

“A chance event in a forest near Jack’s home opens his eyes to the world of ‘Fey’: a place filled with magic, enchantments, and with people and creatures unlike anything Jack has seen before.”

‘Jack Reusen and the Fey Flame’ offers the reader the opportunity to get lost in another world. Girls that turn into polar bears, Jack’s school closed because of a peculiar beast causing havoc, it’s filled with excitement and mystery. (You should also keep an eye out for the ‘war chicken’ in a saddle).

‘Jack Reusen and the Spark of Dreams‘ is the second book in the series and it continues where the Fey Flame left off.

“What happens when people stop being able to dream? A city turning into zombies that’s what! Even worse someone seems to be controlling them.

Can Jack stop a whole new type of magic? Will a girl who can turn into a bear and a huge owl-man be any match for a horde of mindless ‘sleepers’? You’ll have to read it to find out!”

To follow the progress of the Jack Reusen series, read more of John’s work (including a full 1st draft of John’s newest book ‘Marcus’ (for 12 and up), and to find out about upcoming events and school book talks, follow John’s blog (use the link or click the ‘blog’ tab above).