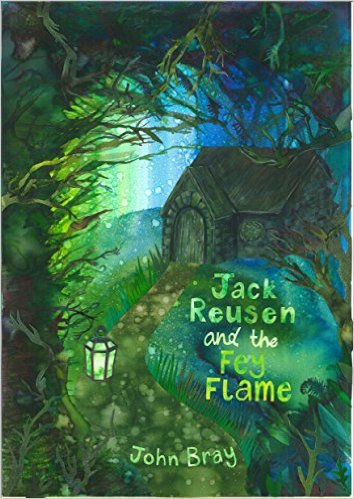 Karen (the cover illustrator) and I did an official/unofficial launch of the new cover for ‘Jack Reusen and the Fey Flame‘ a couple of days ago. It was great seeing the reactions on social media and I’ve been singing Karen’s praises since.

I thought I’d use this post to point out that the cover isn’t the only thing that’s changed. I’ve also spent a fair bit of time trying to shrink the book down a little. The font is still the same (hopefully easy to read) size, but I’ve edited the word count down a bit to make it easier for kids to get through a chapter.

The finished result should be a book with chapters that are just over two-thousand words long (Harry Potter and The Philosopher’s Stone is about five-thousand a chapter) which should work well for children who are just past first chapter books (which are about a-thousand words per chapter). As a rule of thumb I’d say the starting age for readers will be about seven or eight years old. However, children as old as ten and eleven (and some big kids of unspecified age 😉 ) have said that they’ve enjoyed reading the books too.

It’s taken me a while to figure out readership. When I first wrote the books I was writing as a parent who reads books to his kids. I wanted a book that I would find meaty and enjoyable whilst being short enough per chapter to retain my son’s interest. With this in mind I told people that the books were for children aged five or six and up, and I’d say they’re still fine for that age, if you’re the one reading (though ‘Jack Reusen and the Spark of dreams is a little scarier than the first).

However, I’m coming to realise that my readership is starting to include an age group of readers who are a little older than my son and I’m finding this an odd experience. For starters I can only guess at what will keep them interested as I have no recent experience of which books appeal to an eight or nine year old.

Here’s a check-list of things in book one (and a little beyond) that seem to have gone down well at book talks:

In talks in schools these things seem to always get a good response and so it’s been a tough job figuring out what subsequent books will involve. I don’t want things to become formulaic but at the same time I don’t want to ignore the ideas that have gone down well in the past. I like to think I’ve managed a decent balance by taking these characters and throwing them into the middle of two very odd situations in the next two books, (‘Spark of Dreams’ is a ‘zombie’ book, and ‘Children of Fate’ will be similar in tone to a disaster movie).

As I say, I like to think that these ideas have worked well for the most part (at least from what I’ve heard from readers) but I’m always interested to hear advice about the books and about what seems to be able to keep kids interested and entertained. I’m in the middle of editing the third (and fourth) book(s) at the moment so I genuinely value any feedback you might have. If you’d like to share your thoughts please take a second to add a comment below or over at the official facebook and twitter accounts. As always, thanks for reading, all the best, John

Not long ago I had a twitter conversation with ‘Amber Medley‘ (a fellow NaNoWriMo writer). The basic idea was how to move forward in writing (tackling the dreaded writer’s block). I suggested a technique I use where I take a character out of the book and look at what they do in different settings.

Eventually the conversation moved on to how we draw believable characters, especially villains; viz. not writing a bad guy who just goes ‘Mwahahahah!’.

The interesting point that came up was the fact that the more human your bad guy gets, the easier it is to like him/her and, as a writer, you typically don’t feel you should like your villain.

I have a confession to make. Originally the primary villain of ‘Jack Reusen and the Fey Flame‘ (the ‘Wishmaster’) was going to be the overarching bad guy for the series. The ‘Wishmaster’ was to follow Jack throughout the book series, building in malice and in his capacity for harm in natural stages until Jack would have no choice but to face up to him in a huge final showdown.

This sounds dangerously close to the story of another non-magical boy who discovers he can do magic and faces off against a deadly foe. You can imagine my relief then when, at some point in November 2014, I sat down with a cup of tea, started my writing for the night and, for the first time, was properly introduced to my ‘Wishmaster’. I had gotten him all wrong.

He was still just as dangerous, still as malicious, and cruel, but then I started to realise what had brought him there; a need to share his gifts with others and his discomfort at finding that others actually got by fine without his gifts. He had grown resentful of these people’s lack of gratitude and I suddenly understood who he was and the story he needed to need to tell me.

I still couldn’t let him take over my first book, and I still needed him to take a back seat for ‘Jack Reusen and the Spark of Dreams‘ but I made him bide his time. I knew his story now and I knew where he was going to have to go. He would remain a frightful memory for Jack and his friends for a while. After all, their story was just beginning. However, I was sure to set aside space in ‘Jack Reusen and the Children of Fate’ and, to an extent, in ‘Thea’s Quest’ (Book 4).

I grew to care for my villain and in doing so I grew to enjoy what I was writing a lot more. It gained more depth and I found it easier to connect with all of the characters (even bit players).

During my twitter conversation the other day ‘Amber Medley‘ pointed out the fact that she was worried about growing to like her villain but if I hadn’t grown to like mine I don’t know if the books would have moved forward at the pace they did. Perhaps sometimes it pays to like the villain.