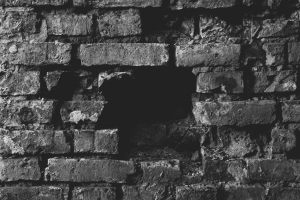 Teeth gritted in defiance, we all face moments that test our mettle. The past few nights I’ve been hitting ‘the wall’ again. It’s something that doesn’t improve with experience. (Apologies in advance, this post gets a bit weird).

I’m growing familiar with this gut-wrenching drain on all joy, all drive, and all ambition. The ‘secret’ is to drum up a ridiculous volume of drive and pep throughout the day in preparation. All the same I get an hour or so in and the wall appears.

A gaping maw opens in its centre and chomps at me. I rush to feed it my hard-won positivity and get on with the task at hand. Sadly the wall isn’t simply a barrier, it’s a predator. It bites my fingers and laughs. It eats and eats my experiences until I’m drawn out. I rest and welcome the meandering adventures of my dreams.

The next day comes with lumps and snippets of joy, comfort, surprise, and fulfilment. Every scrap of experience comes with me to sit in front of the keyboard. To toil at it and shape words to my will. Always waiting in the shadows is the barrier. I hit it and stick to it as he takes my experiences and eats them up once more.

Hours roll by and my barrier and I laugh at the absurdity of what I’m doing. We revel in his hunger and wonder what madness brings me to his door each night.

Many nights ago I hit the wall and it pulled me in. It is alarming in its ferocity, but I know that beyond it lies a finished copy of my third book. Completed pages pile up with each night. The book is taking shape, and for all its efforts, the wall will not win.

Sorry for the theatrics tonight. Felt the need to give the writing muscles a stretch. Hope this finds you well and, as always, thanks for reading. All the best, John 🙂

A long long time ago (actually it was only three years back) I tried to read Harry Potter and the Philosopher’s Stone to my eldest son. It was a few weeks after his seventh birthday and he was on holiday from school. I thought that at last he was ready to sit down and enjoy one of the best children’s fantasy series ever written. He wasn’t.

Don’t get me wrong, he enjoyed it but his attention started lagging in the middle of each chapter. I tried to keep my reading as animated as possible but we still ended up stopping in the middle of some chapters. We would take a break, sometimes for a few hours, sometimes until the next day. For the most part it seemed to work. However, with each break he seemed to forget more details about the book.

At their heart Harry Potter books are mystery books in a fantasy setting. There are clues to remember and puzzles to solve throughout. Forgetting details in these sorts of books takes a lot of the oomph out of them.

I would be asked things like ‘Who’s Ron?’ ‘Why can’t Harry just do magic straight away?’ or possibly the most telling ‘Why does he live with his Aunt and Uncle?’ (asked when Harry has his first Hogwarts Christmas). It was clear he was forgetting more than he was remembering and at around chapter six or seven I could see that almost everything was going over his head.

We put Harry Potter away, to come back to when he was a bit older. All the same, the experience of trying to retain his interest lodged in my mind.

This sensation came back to me when November of 2014 rolled in. The nights grew long, and I discovered a new way to write. NaNoWriMo (national novel writing month) fell into my lap. They said something like ‘you have a book inside you waiting to get out’ and I realised that there really was.

Jack Reusen and the Fey Flame became something that I needed to write; something fantastical, exciting, relatable, and importantly, a book that could (hopefully) maintain the interest of an energetic seven-year-old like my son.

There are lots of books for seven-year-olds. Incredible, exciting, sometimes hillarious books, but I felt like I could write something a bit different. I wanted an element of the seriousness of ‘older’ fantasy books, and a slight taste of the danger and thrills that come with that.

From my own experience I realised that I could hold my son’s attention for about ten minutes, so (estimating a reading speed of about 250 words per minute) I worked out that my chapters needed to be no more than 2,500 words long.

I also wanted to make sure the story could be read all the way through in a relatively small space of time so I limited my chapter count to be sure that the whole book could be read in around a fortnight (at a rate of one or two chapters per night).

When I released the first book in the Jack Reusen series I began to hear that other families were having exactly the experience I’d hoped they would. (I was also pleasantly surprised to find out that some parents were sneakily reading ahead to see what happened next). These responses were brilliant, then, around a month after release, I heard something that changed the way I looked at the books.

At the time I worked in a local toy shop. One of our regular customers came in specifically to thank me for writing the book. I hadn’t been thanked for the book before.

It turned out that she had been trying to get her nine year old son to read chapter books for years. Nothing caught his interest. Then she gave him ‘…the Fey Flame‘ and apparently he read the whole thing in just a few nights. I was taken aback and told her how happy I was that he had enjoyed the book so much.

That boy wasn’t the last to say something similar about the Jack Reusen books. The shorter length seems to have made it easier for a lot of children to enjoy. Now that I know I’m helping kids get into reading I can’t bring myself to change the formula.

The original idea was to give families something that they could enjoy together, but a fantastic side-effect seems to be getting more reluctant readers caught up in a book. I love reading and the idea that someone might miss out on the enjoyment of it is disheartening. If writing short chapters and short books helps get a few more kids enjoying reading then I’ll write as many of these books as I can.

Thanks for reading and please feel free to share your own favourite short/quick reads in the comments below. All the best, John