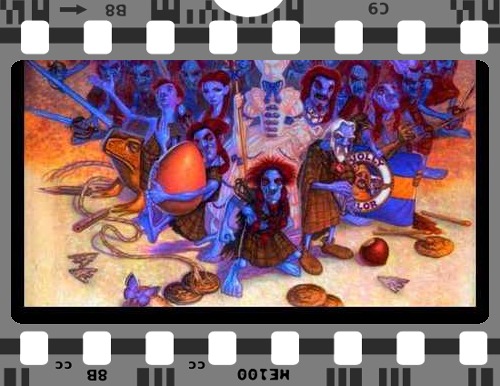 It looks as though there’s going to be a wee free men movie! If you haven’t encountered the NacMacFeegles/wee free men before pop over to this post to get filled in.

The wee free men and their ‘Hag’ (a young witch by the name of Tiffiny) are some of my favourite Terry Pratchett characters from the whole of the Discworld. They’re tenacious, fearless, and more than a little crazy.

The news on who’s producing the movie makes it even better. As a child of the 80s I was exposed to a huge range of Jim Henson creations from Sesame Street, to the muppets, to Fraggle Rock, to Star Wars, and the Labyrinth. Jim Henson Studios are apparently developing the movie and I can’t imagine it being in better hands.

Henson’s son Brian is producing the film and Pratchett’s daughter Rhianna will be writing the screenplay so here’s hoping both can continue their parent’s legacy.

It doesn’t sound like there’s an expected date for release yet but fingers crossed they get it out to us soon.

Are you a Pratchett fan? What other Pratchett characters do you think deserve big screen treatment (keeping in mind the Sky TV creations from a few years back)?

As always thanks for reading, all the best, John

*Information for this post came from an article in the Independent.