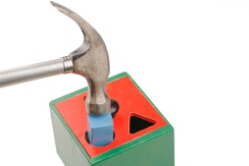 Sometimes you’ll feel yourself stumbling when writing, and one of the worst stumbling blocks can arise where something, or someone, doesn’t fit the story in the way you originally planned. So what do you do when a character doesn’t quite fit the situation which you’ve plunged them into? Here are three hints (in no particular order):

Conflict: Find conflict and resolve it (pick your pace depending on importance of character to the story). This sounds simple but it can be a fantastic way to bring a bit of excitement or intrigue to dull or lifeless scenes and characters and it’s often a great way of moving your plot forward a little.

Mirroring: Sometimes a character will lose contact with who they are and what they’re supposed to be about. Here you can use ‘mirroring’ to draw them back on track; basically find a pivotal scene that helped establish that character at some earlier point (probably the more distant the better) and return to something similar. This approach has a two fold benefit; either this will highlight an organic change that’s already occurred in a way that will allow the plot to move forwards, or it will pull them back from changing too far from who you need them to be and what you need them to be doing.

Lighten the the load: Sometimes a character starts doing the work of two or three characters. Where your plot needs brains, heroics, strength, wisdom, hope, naivity, innocence, etc. you may find that your character is taking on too much. At best they’ll seem very changeable with hard to read emotions, at worst they’ll appear volatile and unbelievable. Here you’ll need a secondary or even tertiary character to lighten the load, let them take on some of the work of moving the story along and allow your main characters to become more established and easier to follow.

Complexity is great, and absolutely essential to a useful, versatile and lasting character but it can also get in the way of getting to know them. Don’t overdo the additional characters though, as you don’t want a humongous cast of characters to keep track of (especially in a children’s book).

There are other things you can do but these three should help neaten up what’s going in your book, and hopefully make your work a little easier too. Anyway, I hope this helps someone out there, or if nothing else that you find it interesting to read about how I work with my own characters. Thanks for reading, all the best, John