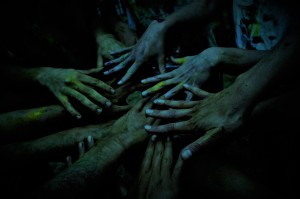 Did the ghouls have the same powers as Marcus? Tash took an educated guess that they didn’t. After all, if they could why wouldn’t Mr Thomas have used them as his own freakish army?

Tash wasn’t ready to take any risks. She dropped to the ground, crawling in what Taz called ‘commando style’ along the wet grass. She shimmied between hedges and other cover until the stones were almost at running distance.

To her left was a small group of ghoul-children watching the golf-course gates with empty eyes. To her right was a single girl, and she was looking right at Tash.

In every direction all that Tash could see was ancient children. Each a ghostly copy of the sort of a picture you’d see in a museum. They closed around her leaving nothing but a small gap, on the other side was the stone circle. The gap closed shut and then came the whistle from the direction of town.

For a fraction of a moment the ghouls looked up to search for Marcus. Tash took her chance and lunged between the ghouls who had closed the gap.

The smell was putrid, like rotting vegetables and stagnant water. Marcus smelled weird but not unpleasant. The smell of these things hung around in her nose as she pelted her way towards the stone circle.

Deep breaths of rotten air fuelled her last few strides. She flung herself onto the nearest rock. Her wrist gave a hollow ‘crack’ as she landed but she barely noticed the pain. She was safe. Even better; the others were safe.

Marcus drifted down towards her, landing just feet away, clearly reluctant to go any further:

“It’s not the witching hour quite yet. He sent me to get you. Insisted that there is still time. He said to tell you that if you aren’t there on time he’ll kill them.”

“He was going to kill them anyway! At least if I stay here he doesn’t get what he wanted.”

“The ritual doesn’t exactly ‘kill’ them but I know what you mean. It’s not much of a life is it.”

He gestured towards the ghouls surrounding them. Their quiet moans carried perfectly in the icy night air. A blasting wail shattered the quiet as three police cars flew down the road beside them illuminating the stones in pulsing blue.

Despite the shock their presence was a comfort to Tash and a grin crossed her face:

“I don’t think Mr Thomas will be doing anything to them now.”

She checked her watch: 2:45 am. They had made it with time to spare. The police would have heard about Taz’s screams. They would be investigating right now. Tash’s parents might even have read the note she had left on her bed. It was over:

“So what do you do now? If Mr Thomas is arrested there’s no reason to get us all together in the school at three. Out of interest, why do you always do this in the school?”

Marcus grew blurry, his form drifting apart as he grew lost in concentration. His answer was half hearted, his thoughts focussed on something else:

“It’s not the school exactly. Mr Thomas made sure that one of these stones was dug up and used in the construction of the school. Along with it they took a large amount of soil. I was buried in that soil. The school was built using my grave.”

Marcus’ real form had been bad enough to look at before. Now that Tash knew his body was buried somewhere, there was something somehow more unnatural about him. Something hollow. He paced in a circle around the stones, stopping every now and then to steal a glance at the golf club gates:

“Ah, there we are. I sent some of the others on a little errand. She’s younger than what we normally use but she should make a decent replacement.”

In the distance Tash could make out a tiny girl in rainbow pyjamas, her eyes red from crying. Two ghoul-children led her towards Marcus:

“Sorry Tash. I really am. I have orders to have four children in the school before 3am and if you won’t come I’ll have to use James’ little sister.”

Tash could feel the bile rising in her throat. It was over. The police would have Mr Thomas by now. Why was Marcus carrying this on? She screamed at him in rage, fighting back her own tears. His face hung long, his brow furrowed, as he struggled with something inside:

“Tash, I’m sorry. I want to do things differently but I can’t. It has to be like this. I always do as instructed. I have no choice. Now, make things easier and come with me to the school. We can leave James’ sister here at the stones so you know she’ll be safe.”

Tash’s moment of victory dissolved into nothing. Her throat ached, she tried to swallow but she had no saliva. Tash’s voice creaked as she stood up from the stones and tried to comfort the frightened girl:

“It’s OK. I know these people are scary but those stones are magic. The bad people can’t get you if you’re there. Sit on that rock and scream.”

James’ sister rushed for the stones and planted herself down on a mossy patch. Tash looked at Marcus. His black eyes told her nothing. She hoped her own eyes could hide things as easily. It wasn’t fair, she could reach the stones in two or three long strides from here.

She could reach the stones! Why was she walking towards Marcus? To keep a promise that meant her and three others would be turned into ghoulish shadows of themselves? No thanks! She kept her face as straight as possible and braced herself for the leap back to the stones.

As her leg muscles bunched a ring of cold and wet closed around her wrist with unyielding power:

“Good try Tash but I’m afraid we really must go. We have an appointment to keep.”

With this in  mind, if you’re enjoying ‘Marcus’ and you want to be sure you get a link to the newest chapter as soon as it’s out, you can also get an e-mail reminder by clicking this link. Mailing list members also get access to printable files so you’re not forced to read it all from a screen.

Click here to read on to Marcus: Chapter 8: Borrowed Time