Tash tried phoning Nicky a third time. It went to her message service. Her mouth was too dry to leave a message, she had a feeling Nicky wouldn’t be listening to it anyway.

At some point Marcus had left their digging party. With each burst of energy that went into the stone Marcus grew a little weaker. Part of Tash was glad he went, it wasn’t easy doing what they had to do while watching the ghost-boy.

Ross distracted himself with the simple act of digging. Andrew and Louise had figured out what was happening to their dad and had long since realised that distracting themselves wasn’t an option. The light display created every time they touched bone to stone offered what could well be the most depressing light display ever.

There was a pause before James replied:

Once he had been filled in by Tash James had a whole host of options. Not one of them was attractive. Staying at home was worse than useless. Chasing after Scott and Nicky put the kids in danger. Option number three (the stones) had already claimed its first victim. Worse still, ‘option three’ left James and his kids in the open (albeit with a ring of magic stones protecting them).

James clung to the only tangible thing that might help keep his family safe. He grabbed their coats and shoes:

“Come on kids we’re off to the school.”

Harry didn’t like that one bit, wailing every moment that he got ready. Theo moved much more quickly:

James still couldn’t get the truth out:

The car ride was silent, but for the constant whining of Harry. James pulled up round the back, parking in front of the old locked gates. He was on a constant lookout for ghoul-children.

Willow was gone. Gordon was gone. They couldn’t be sure but it looked as though they had lost Nicky and Taz too. The sooner he had some backup from Marcus the safer he’d feel.

The back door was hanging open when they got there. No Marcus to greet them.

James held his kids close, their footsteps making clumped shuffling noises along the corridor. He lied to Harry; told him they were part of a tour of the old school building but that they’d arrived early. Others would be here soon.

Harry took the lie and played up his boredom:

“I don’t want to go on a stupid tour. This place is boring and old. There aren’t any other kids here.”

James and Theo saw this as a strong positive.

James placed himself in the central stairway. Two grand staircases meeting in the middle, James remembered someone telling him one used to be for girls, the other for boys. He used to take the ‘boys’ stair every time even though that tradition had ended long before he started there.

Tonight he couldn’t care less about taking the ‘right’ stair, all he wanted was a good location to get Marcus’ attention. He didn’t want to risk yelling, he didn’t want to rattle the boys, but he also didn’t want anyone outside the school asking questions. James repeated Marcus’ name, making it clear he needed him.

James followed the stair down to the old boiler room. He stopped calling Marcus when he found the boiler-room door cracked and beaten. Shattered remains of the slide bolt lay on the floor, the padlock still attached.

For a moment he considered leaving the kids and investigating for himself. His imagination swam with ideas of what could happen to them if left alone. No good could come of that.

They filed into the old boiler room, James helping his sons down the old stepladder to the basement below.

The boys held his hands tightly as he brought them to the bookcase at the end of the corridor. Harry relaxed his grip when they found the ‘secret passageway’. Brimming with excitement, he struggled against his dad to be the first down the steps. James held him back.

James switched on his phone’s torch and scanned the tiny room. One difference was instantly visible; in one corner lay a mound of dirt. A sharp, clay smell told him it was fresh.

A tiny scrap of paper poked out from the top of the mound. James stepped towards it and picked it up.

If you find this, run!

James dropped the paper and ran for the stairs, picking the boys up under his arms as he went.

They ran the length of the corridor, stopping at the bottom of the stepladder.

James heard footsteps in the room above. He drew his children to one side holding one finger to his lips; shh.

He couldn’t risk calling but he sent a simple text to Tash: 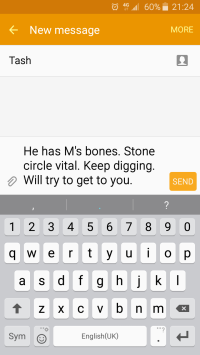 Marcus’ whistle echoed down from above. James held his sons close not knowing what to think. With every fibre of his being he wished they could be somewhere else. He whispered into their hair:

“If you get away go to the golf-course. Tash will keep you safe.”

Tash’s heart sank as the tiny form of Harry awkwardly lifted himself over the fence and ran to her. She gathered her strength and launched herself out of the stone circle to collect the boy.

He swung his arms, copying runners he’d seen on TV. It didn’t help his speed, in fact Tash worried that he was making himself a clearer target. She reached the boy just as the black smoke appeared. Marcus’ face drifted past her, expressionless, cold.

Harry squealed as he fell to the ground. Marcus had his leg. Tash flung herself at him, grasping his hands. She pulled. With all her might she pulled.

Harry’s shoe slipped off in Marcus’ hand (‘My lighty-up shoe!’). Tash seized her chance, hauling the boy to her. She gathered him up and run for the circle.

Marcus gathered into his solid form and ran after them.

Tash snapped her legs back and forth, leaping more than running. Marcus gained on them with relative ease but stopped, the blue glow of the stone circle reflected in his black eyes.

Marcus hovered outside the stone circle but the digging and ‘planting’ continued. Harry seemed pleased to have something to do. Tash wondered how much he understood about what was happening.

A new thought occurred to her as she lifted more soil; there were three bags, no matter how hard they worked no matter how many bones were in contact with the stones, they would never be enough. Mr Thomas still had a bag and that was enough for his needs.

She looked at Marcus. More than enough.

Marcus circled them, drifting instead of running. Soon all they could see was a circle of smoke and a face swirling past. He grinned:

And he was gone. It was nice to be out from under his watch but they couldn’t let themselves slow down.

Andrew’s phone beeped. 8pm a reminder for some show he wanted to watch. Meaningless now and so much of the night still to get through. Ten minutes went by then came a crackling electrical sound. Ross grabbed his police radio from an abandoned pocket.

“All hands, all hands. We have reports of another missing child in Crieff. Suspect same perpetrator as previous incident. Take precautions, this guy is stronger than he looks.”

Tash sat down on one of the rocks:

“More kids. We can’t let him get away with this. Got to keep at it.”

They continued with their work. The bones in one of the bags rattled for a moment, as if stirred up by something. Marcus drifted into view near the golf-course gates. He wasn’t happy, Tash could tell. All the same he had been sent by his puppet-master to gloat about the new addition. He played his part.

This pattern continued. More calls on the radio. Every time Marcus appeared the bones would rattle (Marcus must be like a magnet to them, Tash wondered if he was trying to draw them out of the circle for his old master). Marcus came to gloat over every kidnapping, grinning his false grin, forced to laugh by a puppet-master he despised.

By the time fifteen children had been taken, the town was lit up by the blue flashing lights of most of the police cars for the region.

Tash could remember what the captured were going through. She had been there herself once (albeit briefly). However, the sheer volume of kidnappings left her imagining a prison, teaming with children, tired, confused, frightened. How was he doing this? Why so many? and where could he be hiding them all?

Click here to go to ‘Marcus: Chapter 19: Count the Ghosts‘.

2 thoughts on “Marcus: Chapter 18: Between a rock and more rocks”