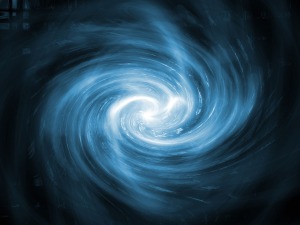 The ghoul-girl at the door grinned from ear to ear. Eyes fixed on Marcus she rubbed her belly as though filled with food for the first time in centuries. She strode towards to her Uncle.

Marcus didn’t wait, he was smoke, he billowed from the door and flowed along the corridor. He had distracted them long enough. Tash had what she needed and had started her work. Marcus’ place was beside his friend. Beside all of them.

Marcus didn’t change form again. He didn’t need to; the extra power flowing through his body, left a thrumming buzz in his head. He yelled with laughter, with joy. Overfed, over-brimming, unpredictable.

If the remaining three ghoul-children felt like this too? Marcus thought of their hate-filled eyes. It didn’t bear thinking about.

He arrived on the golf course to see Taz, covered in blood, crawling for the ring of stones. He inched closer to safety only to be dragged back by a glowing creature.

It had been a ghoul-child once but now it’s face was more skeletal, like an x-ray was shining through. Green bones glowed out and the face was stuck in a constant deathly grin. Without looking up the ghoul-boy spoke to Marcus. It’s voice bold and strong as any living person’s:

“Good evening Uncle. How do you fare tonight? I appear to have lost a cousin and gained something…wonderful.”

The boy twisted Taz’s leg. Marcus winced at the crunch. He dropped on his nephew, moving from smoke to solid effortlessly.

The boy threw him aside and reached for Taz’s leg once more. However, Taz had hauled himself just close enough to be pulled into the stone circle.

Tash and Ross pulled him by the arms and the ghoul-boy pulled at him by his injured leg. A tug of war with a rope that screams can be pretty disconcerting but Tash and Ross held on tight.

Marcus slid an arm around the neck of the ghoul-boy and drew him off of his friend. Taz collapsed face forwards into the ring. Blood sprayed from his lips with each short painful burst of breath. All the same he smiled up at his saviours. Then frowned:

“Well? What are you doing? Get those bones buried!”

Outside the circle a crowd of the last remaining ghoul-children had gathered. They centred their attention on Marcus but one of the girls focussed her attention on the circle, throwing rocks at the small crowd of bone buriers.

The ghouls couldn’t cross the boundary but it became abundantly clear that a well-thrown rock could make it through to the middle with ease. Regardless of who was throwing it.

The rocks clipped their arms and even their heads. The diggers would stop briefly to tend to cuts, scrapes, and deep purple bruises. Small clumps of time lost to every well-placed missile.

Marcus fought on. The diggers continued their work wearing their blemishes as badges of honour.

As more bones made contact with the rocks, the glow from beneath increased. Tash drew her hand back as sparks licked out for more.

Andrew poured in another handful of bones, the sparks hissed, and one of the ghoul-girls disappeared.

A swirl of energy fizzed and cracked then spread out into four streams. Two poured into the remaining ghoul-children, one into Marcus, and one flew away into the night.

Marcus saw this and looked at his friends within the circle, eyes wide, trying to communicate something important.

The last remaining ghoul-boy punched Marcus in the gut. It was a pain unlike anything he had felt in two millennia, almost as though he actually had a gut again.

The ghoul-boy punched him in the chest, then once in the mouth. Marcus coughed (another oddity for a creature with no internal organs) and spat liquid onto the grass. Blood.

With the back of his hand he wiped his mouth. His knees wobbled as he felt the thick blood run from the cut on his mouth. The ghoul-boy shook his hand in pain, wincing as he looked at his damaged knuckles.

The ghoul-girl grabbed more and more rocks, firing them hand over hand into the protective circle. Flesh made her more uncomfortable than she had expected. It had been a long time since she had last worn it.

Despite her efforts the electric fizzling slurped up the last of another skeleton. Her brother disappeared. Her body brimmed with power and she gaped at Marcus. A wet rattle echoed between the two of them as they both filled their newly returned lungs.

“Please! I remember you now. Messu. My brother named you after the acorns on the trees he cared for. I never meant for you to go through this. I did His bidding, it took years to learn how to break free. I am sorry that you all had to go through this with me.”

The girl relaxed her shoulders:

“You didn’t have to befriend us all though. Every ghost-child you made. You made friends first. It made it all so much worse. The betrayal hurt much more than anything the magic did.”

“I am so sorry. I never thought it through. I was lonely. I missed people, and he used that, he used my friendships as a weapon. I really am so sorry Messu. I hope you will go somewhere good once the magic is broken.”

The girl shook her head and took hold of her uncle’s hands:

“Marcus, I don’t think you ever understood the stones. That’s not how they work. What you’re doing just now, you’re actually…”

Her words dispersed into the night. She was gone.

Blue light flowed into the stone circle then erupted out in two streams. One stream reached Marcus, knocking him to the ground with its force. The other out into the night. Marcus watched, slumped on the grass, as more power disappeared into the distance.

The skeletons of dozens of ghost-children lay nestled under the stones. Now came the turn of the final ghost-child; Marcus himself.

On the inside of the safe Mr Thomas found a small plaque. A manufacturer’s guarantee, moulded in metal and screwed on tight.

This safe promised to be not only tamper-proof, pick-proof, and fire-proof it was also, apparently, bomb proof. He was testing that theory. What was becoming maddeningly clear to those outside was that whatever he was doing to the inside of the safe door was about to reach a force greater that anything the safe’s makers had ever imagined.

Nicky and Gordon ushered every child out of the room. If Mr Thomas was about to break his way through a door of solid cast iron they weren’t going to stick around to see what he did next.

Gordon held the door as Nicky helped the children up and out of the room. She tore open an ancient door and led them up to the abandoned hotel above them.

Gordon turned in time to see a trickle of blue light weave through the hinge area of the safe door. The second of these beams so far. Just as the first had surprised them, this one seemed to offer Mr Thomas more energy.

The iron door creaked against the strain. For the first time Gordon could hear Mr Thomas’s yells. Pure, animal rage heaved against the door but, despite some bending, the door still held.

Gordon heard the sound of excited child voices near the exit. Nicky had got them all out. There was no reason for him to stay here. Whatever Mr Thomas was now, it was different. If Gordon tried standing his ground it would be like a fly fighting a bus.

Then he stopped. Just outside the door lay a little boy. He had missed his step, been missed by the others, and left behind. He tried to walk on a badly twisted ankle but Gordon knew they didn’t have time.

He swept the boy up in his arms and hoisted him onto his shoulder in a well-practised ‘dad’ technique.

Despite his dishevelled state Gordon was still in uniform. Outside the hotel, gathered in the town square were at least a dozen police cars. The whole road was closed off. When one woman along with every single missing child left the building, only to be followed by an exhausted police officer, carrying an injured child on his shoulders the officers present came to a single conclusion.

A single officer began to clap, then that clap found friends. It rippled through the police officers present building into enthusiastic, highly relieved applause.

A couple of officers ran over to him. One was plain-clothed and spoke with a quiver of concern:

“Do we know if all the children are accounted for? It’s just…earlier tonight we caught two men with a sack of bones.”

He left the word ‘bones’ hanging in the air. Gordon thought of Taz and James with a lump in his throat:

“Do you have the men here?”

The detective shook his head:

“Well…that’s the thing. It would appear that mistakes were made. We’re still figuring out the details.” The officer could barely maintain eye contact “Perhaps a third man was involved. We don’t know. On returning to the car, no more than two minutes later, it was found that the doors were unlocked, the boot open, evidence gone, and two pairs of handcuffs were retrieved, unlocked on the ground beside the car. We’re still looking for the men.”

Gordon let out an audible sigh of relief:

“They’re not the ones you should be worried about. Trust me. We need to concentrate on what’s in there.”

He pointed to the building behind him in time to catch another of the odd blue streaks of light. It arced over the building and plunged through the chimney stack.

Behind him Gordon heard multiple questions, the most common being ‘what was that?’. Gordon knew. He braced himself. Now he had backup, but did they stand a chance against Mr Thomas?

They had to at least try.

The door of the safe ruptured from the basement, tearing through every floor of the four storey building. It tore a hole in the roof, showering them with slate, then flipped a dozen times in the air, before landing among the gathered crowd, cutting the hood of a police car in two.

Click here to go to ‘Marcus: Chapter 24: The death of the Drummond Arms‘.

1 thought on “Marcus: Chapter 23: A monster in the Drummond”