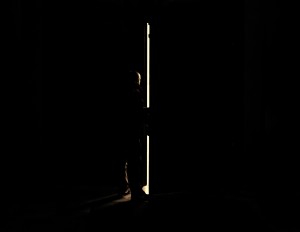 James watched on as small groups of children were marched stony-faced behind their ghoul-children captors. The supply seemed endless. Marcus barely appeared among them, often disappearing for long spells. Meanwhile Mr Thomas stood out as an ever-present entity, leering over each potential power increase that shuffled through the door.

James studied the room on his arrival, seeking out the source of Mr Thomas’ power; his bag of bones. James had expected to see the old man huddled near them but he was much more interested in new acquisitions. The old beast barely looked at the remains. Bones of children he had used to continue his sorry existence across the centuries.

The man had shoved the sack under a bed in the corner with little more than a thought. Teetering on it’s side it finally tipped, releasing a small cluster of bones from the open top.

As the number of children seized by the ghouls increased it all grew to be too much for Mr Thomas. He slumped onto the bed, ecstatic, and exhausted at the prospect of so much power. So many more years to add to his lifespan.

In another part of town Daniel was bored. His mum had stopped him doing anything. No computer games, no TV, he wasn’t allowed outside. She was holding him prisoner, he couldn’t imagine anything worse.

At least he had some good books to read. The only sound in his room was the thick ‘swila-cha’ sound the pages made as they turned. There was a ‘click’ in the corner of his room. It wasn’t a huge surprise, the house was a bit draughty in places. Sometimes things moved and fell.

Daniel glanced over to see what had fallen. Nothing. He closed his book and placed it on his pillow. Where had that sound come from?

The floor was clear. Everything on his bookcase was stacked as normal. A ‘click’ from the window forced his attention outside. It was a girl.

He couldn’t see her face but she didn’t look familiar. Was she standing below the wrong window?

Daniel fiddled with the latch and shoved the window open:

“Hi, I think you’ve got the wrong house.”

The voice that came back was quiet as a whisper but cut through the air, remaining as crisp as if she were standing right in front of him:

“…I need your help. Marcus is doing something. You know about all of this, you were the only one I could come to.”

Daniel stepped back from the window. Out of sight. Slipping to the floor he shuffled along to the window. He couldn’t look up, just swayed his hand about till it found the window catch. Desperately trying to close it. He lay out flat on the floor breathing as quietly as he could.

The whisper penetrated the closed glass:

Daniel couldn’t remember much from his night away. What glimpses he had were beyond awful. Nothing about those children was natural. He spoke under his breath, to keep himself sure.

The girl’s voice flowed in, burrowing through his ears:

“…if you don’t a lot of good people will die tonight.”

Daniel looked up. The girl peered through his window, crouched on his second-floor ledge. Her face drawn out, expressionless. If anything it was more inhuman than the faces he remembered from his night away. More dishevelled.

He backed away, collapsing on the bed as it hit the back of his knees:

Her mouth moved but the rest of her face was as still as a doll’s:

“…if I still had the power to do that do you think I would be here asking you for help?”

That wasn’t the answer Daniel was looking for. It wasn’t really an answer at all. He stayed rooted to the bed. A small hand, palm outstretched, squeezed against the glass:

Daniel rolled his eyes and shrugged, careful to make it look as convincing as he could (it wasn’t):

“Fine. Hope you don’t get too bored watching me read my book.”

He lay back on his bed and tried to focus on the words on the page. Sweat kept dripping into his eyes, stinging, blurring the words.

She leaned her green-white cheek on the window:

Daniel refused to look at her:

“…no. I’m eighty-six. It was my birthday in June. I wasn’t here. I’m never here. All I get are endless Novembers.”

Daniel put the book down but kept his eyes away from the window:

“You almost gave me ‘endless Novembers’. I didn’t see you holding anyone back.”

She was silent for a moment. Daniel wondered if he might be able to read now:

“…I’m sorry. We’re not as strong as Marcus. It’s only now that your friends are releasing us that I can think for myself again.”

Daniel turned to the window, forcing himself to look into her lifeless eyes:

“…yes, we’re being let go. For some of us our time is over. They’ve gone wherever it is that people normally go. I hope I can go soon. Your friends think are helping us so much. I worry though; they think it will stop Mr Thomas. It won’t.”

Daniel edged towards the window and released the latch. Stepping back to give the girl room.

She slipped in with no effort whatsoever:

“Good. Thank you Daniel. Now, can you get a knife? A big one if possible.”

Marcus was out again, leaving Mr Thomas attended to by his four ghoul-child guards. A great yelling announced another adult had been brought to the room. Gordon scraped through the door, briefly catching a handhold on the door frame.

He lifted himself into a sitting position as his captors continued dragging him, his fists thumping the ghoul-children at his heals.

His punches made hollow crunches, like meat hit with a mallet. The children didn’t even break their stride. The police officer was hauled into a corner and chained to a radiator by his own handcuffs. His eyes darted round the room, desperate for details. They stopped on James:

James strained against his ropes. Mr Thomas lifted his head and glared at the men:

“Pathetic! Call yourselves men? You who allowed your wife to be taken under your nose? And you who wear the badge of authority for this town but allowed yourself to be overcome by children.”

The old man coughed, deep, dry, and hard. He turned to one of the ghoul-children guarding his bed:

Strips of ancient tartan were torn from their clothes and tied over the mouths of the two men. The fabric stank of rot, it’s course wool dug into their cheeks, forcing James’ tongue into the roof of his mouth.

Theo looked up at his dad. James lowered his head to meet his son’s, tears in his eyes. From the back of his throat he managed to sound out the words:

Theo shook his head, bewildered. James tried again and this time Theo got it:

Sure enough, as the minutes went by, and the room filled with more kidnapped children, it also emptied of a fair portion of its ghosts.

Click here to go to ‘Marcus: Chapter 20: Under The High Street‘.

Marcus: Chapter 20: Under The High Street